NFIB Leadership Council member, Ray Pinard, announced the endorsement of Daniels for re-election stating that his commitment to work positively on small business issues has been “demonstrated by his voting record and his service as Chairman of the Senate Finance Committee, which produced balance budgets. Gary’s experience in the Senate is an asset for small business and thus workers in District 11. He has the backs of workers and small business owners in the state of New Hampshire.”

“With energy prices soaring and record setting inflation coming from Washington, it is more important than ever for Senate District 11 voters to re-elect Gary Daniels,” Pinard continued, “Senator Daniels understands the crippling impacts these additional financial burdens would have on a small business.”

Pinard continued, “Daniels understands Main Street and the small business community. Gary has voted against mandates like a $15 minimum wage and a mandatory one-size fits all leave policy that would be crippling to small business owners throughout the State of NH.”

“In short, Senator Daniels recognizes that the business cost drivers that are debated in Concord every year have a real impact on small businesses. Gary gets that increased labor costs through mandated wages or benefits reduce job opportunities for his constituents. And throughout Daniels’ years of public service, he has understood how our state has been able to create and maintain the NH Advantage. Specifically, to that end, he has and is opposed to an income tax and a sales tax.”

State Senate candidate, Gary Daniels stated, “I am proud to receive NFIB’s endorsement in the race for State Senate in District 11. Small business is the backbone of New Hampshire’s economy. They are the job creators in this district and need to be supported, not thwarted….with higher costs and taxes”

Daniels continued, “Growing our state’s economy and creating opportunities for good paying jobs will be my top priority as state senator. Providing tax relief and reducing regulations will empower our small businesses to grow and create jobs for Granite Staters, especially for the communities in District 11.” 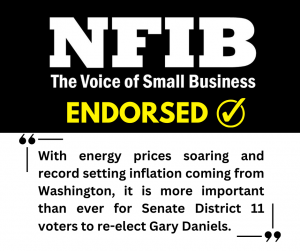 Click on the titles to reveal the full article and social media sharing icons.